There are precious few things in life that can draw out the little kid in us all, make us gaze upwards slack-jawed and amazed. One of them’s going on right now out in New Mexico. It’s the Albuquerque International Balloon Fiesta, and it lasts through Oct. 14.

The clean desert heavens are filled with an array of colorful, suspended Christmas ornaments, the whoosh of the balloons’ hot-air burners majestically bearing them aloft. See one of these ascensions just once and you’re hooked forever on the sport – even if it’s just from the perspective of spectator.

Days begin with the Dawn Patrol, as pilots take off in the dark to probe wind directions and velocity at different altitudes. Weather permitting, inflation begins about 5:45 a.m., with takeoff 15 minutes later. Inflation and launch have their own soundtrack, making the moment even more magic. 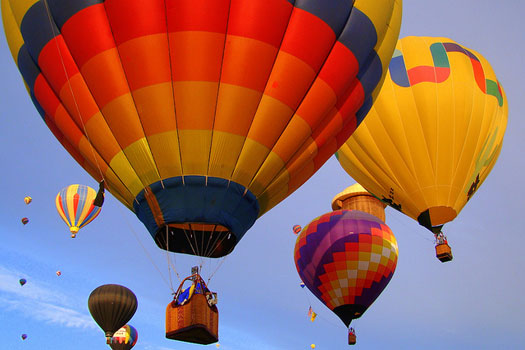 If the Dawn Patrol is sublime, Mass Ascension is spectacular. Balloons launch in two waves. Organizers say, “Launch directors, also known as zebras because of their black-and-white striped outfits, serve as traffic cops.” They coordinate the whole affair, keeping things safe and sane. Weather permitting, on mass ascension days the signature show gets underway about 7:15 a.m. Heading the ascension is a balloon flying the Stars and Stripes, this to the stirring strains of The National Anthem.

Rounding out the best of the days are Balloon Glows. These are tethered events, where pilots light up their earth-bound craft, rendering the desert floor an illuminated wonderland. The Glows are followed up by some bodacious firework displays.

The fiesta began back in 1972, in celebration of a local radio station’s 50th anniversary. As many as 100,000 folks show up on the launch fields each morning to watch the balloons take off.

5 reasons why you need to visit northern Croatia