More than 812,000 people call Seattle home, according to Visit Seattle, and it’s not hard to see why. Located on the eastern shore of Puget Sound, there is much to see and do in the city’s 83-square miles. From fabulous family-friendly activities to great restaurants and offshore wineries, Seattle is the ideal destination for all kinds of travelers.

No matter if you have a day or a month to spend in Seattle, we have come up with 25 cheap and free things to do in this eclectic hot spot.

One of the oldest farmer’s markets in the U.S., the nine-acre Pike Place Market in downtown Seattle is an iconic attraction. From vendors throwing fish to colorful produce stands to watching street performers, this lively market is fun for all. Be sure to try Rainier cherries and Washington apples.

Get lucky with Rachel the Pig at Pike Place Market

No visit to Pike Place Market is complete without stopping to see Rachel the Pig, the mascot of the lively area. She is located beneath the “Public Market Center” sign and clock at the corner of Pike Place. Sculptor Georgia Gerber created the 550-pound bronze cast pig after a real prize-winning 750-pound pig. Rachel is actually a piggy bank; her coins provide funds to the five social services located in the nine-acre historic district, including a food bank, senior center, childcare center, medical clinic and assisted living facility. Since 1986, more than $200,000 has been raised. Folks put coins in Rachel the Pig and rub her snout for luck.

It’s easy to find dozens of cheap and free things to do in Seattle, especially when you buy a Seattle CityPASS. This multi-attraction ticket is good for nine days and offers entry to Seattle’s popular attractions like the Space Needle, Pacific Science Center, Seattle Aquarium, Experience Music Project and Science Fiction Museum (Ticket: $69/adult, $49/child).

Go on an art walk in Pioneer Square

Architecture buffs will appreciate a walk through historic Pioneer Square. Located on the southern fringe of downtown, the neighborhood features 20 blocks of Victorian Romanesque architecture, museums, art galleries, restaurants and nightlife. On the first Thursday of each month take advantage of the Pioneer Square First Thursday Artwalk, a free self-guided tour of the galleries.

Seattle is famous for artisanal treats like the hand-forged gourmet doughnuts at Top Pot Doughnuts. Since 2002, lines have been forming for the gourmet doughnuts served in vintage storefronts. More than 40 options include the Old Fashioned (a cake doughnut that is moist on the inside, slightly crunchy on the outside and comes in a variety of flavors, from raspberry glazed to maple icing), Feather Boa (a cake doughnut topped with pink or chocolate icing and coconut shavings) and filled doughnuts like Raspberry Bulls-eye and Valley Girl Lemon.

The site of the 1962 Seattle World’s Fair is the epicenter of culture in Seattle. The 74-acre Seattle Center is a sprawling park where folks find some of Seattle’s most famous attractions, including the Space Needle, Pacific Science Center, Seattle Opera, Pacific Northwest Ballet, Seattle Repertory Theatre, Intiman Theatre, Seattle Children’s Theatre and Seattle Children’s Museum.

A laid-back ferry ride to idyllic Bainbridge Island is a wonderful way to take in Seattle’s skyline and tour one of the dozens of islands off its shores. Washington State Ferries, which carries more than 23 million passengers each year, offers a low cost option to Bainbridge Island, a 35-minute journey that leads to quaint farms, charming wineries and scenic trails.

The first winery in Seattle to grow all their grapes on location, Bainbridge Vineyards is a short ferry trip across Puget Sound. The winery crafts a limited production of 1,200 cases annually, made from grapes grown on its seven-acre vineyard. Wine tastings are offered on Saturday and Sunday afternoons only.

Eat dim sum and shop in the Chinatown-International District

Chinese immigrants originally came to Seattle in the 1860s to work at the town’s saw mills, rail lines and on fishing boats. They settled into an area now known as the Chinatown-International District. Located south of downtown Seattle, Chinese, Filipino, Japanese, Vietnamese and Southeast Asians call the International District home. Don’t miss dim sum and a stroll through Uwajimaya, one of the largest Asian grocery and gift stores in the U.S. 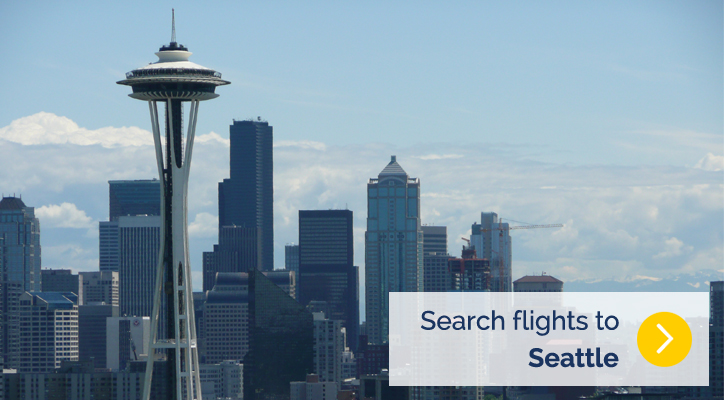 Go on a musical journey at Experience Music Project

Operated by the National Park Service, the Seattle part of the Klondike Goldrush National Historic Park (there is another Klondike Goldrush park in Ketchikan, Alaska) commemorates Seattle’s role in the 1890s gold rush. The “park” is actually a building in Pioneer Square that features exhibits about the 70,000 people who rushed to Seattle in search of gold.

Aquarium proprietor Ivar Haglund introduced Seattle to his crispy fish ‘n chips in 1938 and the rest is history. With more than two dozen restaurants, Ivar’s is the king of seafood in Seattle. Try the signature clam chowder and the battered fish with crispy golden French fries.

This nine-acre public Olympic Sculpture Park is perfect for a leisurely walk. The park features a 2,500-foot path flanked by sculptures that connects the Belltown neighborhood in downtown Seattle to the waterfront.

Get artsy at the Seattle Art Museum

Named for the Canlis family who have been running their fine dining restaurant and bar for three generations, a stop at Canlis for cocktails is a must. When Canlis opened in 1950, a year after Seattle lifted its ban on restaurants serving liquor, it brought back the cocktail tradition. The lounge offers a cozy spot for one of the bar’s eight cocktails like the Key to Door #8 (Belvedere Diamond Rye Vodka, lime, Falernum, Rivesaltes and Jamaican rum) or a whisky from the Canlis Family Whisky Collection (each bottle has been hand carried by one of the Canlis brothers).

Built for the 1962 Seattle World’s Fair, the futuristic, 605-foot Space Needle is an icon of Seattle. There is an observation tower 520-feet up, which affords a 360 view of the Seattle skyline, Puget Sound and the Cascade and Olympic mountains.

The 90-minute guided tour goes underground below Pioneer Square’s neighborhood. The subterranean passages once served as roadways and storefronts, but a great fire in 1889 destroyed much of the original wooden structures. Seattle was rebuilt atop the ruins, leaving these tour-able remnants.

A trip to France inspired Fran Bigelow to create European-style chocolates. For more than three decades, locals and visitors alike (including the Obamas) have fallen in love with Fran’s Chocolates. From caramels to truffles to gold bars, these are some of Seattle’s best sweet treats.

Visit the home of the Seattle Mariners

The one-hour tour of Safeco Park includes an up close and personal look at the ballpark. A tour guide leads baseball fans to the press box, private suites, field, dugouts and visitors clubhouse.

Grab a coffee at the original Starbucks

Located in a corner storefront in Pike’s Place Market, the original Starbucks opened here in 1971. The LEED Gold certified coffee shop features a wall tapestry made of burlap coffee bags from the local roasting plant.

See the home of the Seattle Seahawks and Sounders FC

Football and soccer fans can go behind the scenes with a 90-minute tour of CenturyLink Field. The tour includes suite and club level access, a walk on the field where the Seattle Seahawks and Sounders FC play and the field’s iconic 12th Man Flag Pole.

Play outside in Discovery Park

Seattle’s largest park is the perfect place to go for a run, play tennis or enjoy a picnic (there are even two miles of protected tidal beaches here). Located at the site of former U.S. Army’s Fort Lawton in Seattle’s Magnolia neighborhood, the 534-acre Discovery Park offers enviable views of Puget Sound and the Cascade and Olympic mountain ranges.

Since 1954, Dick’s Burgers has been the go-to place for inexpensive, but exceptional burgers, hand-cut fries and thick milkshakes. A regular 1/8-pound hamburger will only set you back $1.35. There are five locations in Seattle and one in Edmonds, Wash.

25 cheap and free things to do in Seattle was last modified: June 26th, 2019 by Lauren Mack

Next Weekend Away: Seattle

In pictures: Places covered in fog