January
$197
February
$198
March
$237
April
$226
May
$212
June
$244
July
$266
August
$232
September
$207
October
$217
November
$217
December
$237
January is currently the cheapest month to fly to John Wayne/Orange County. At this moment in time July is the most expensive month. These prices are determined by multiple factors and booking in advance can help keep costs down if your schedule is not as flexible.

When is the best time to fly to John Wayne/Orange County?

When is the best time to book a flight to John Wayne/Orange County?

The price you pay for your flight to John Wayne/Orange County may vary depending on when you book.For the best chance of a lower fare, look to book 17 days in advance of your trip. Fares are likely to increase a fortnight or so before your departure date.

Which day is cheapest to fly to John Wayne/Orange County?

Saturday is currently, on average, the cheapest day to fly to John Wayne/Orange County. Flying on Sunday will result in higher flight prices.

What time of day is cheapest to fly to John Wayne/Orange County?

Flights in the evening are typically the cheapest time of the day to fly to John Wayne/Orange County. Flights at noon are usually the most expensive.

John Wayne Airport (SNA) is located in Orange County in California, 14 miles (23 km) from Disneyland Resort. It was the first airport in the United States to be named after an entertainer – the film star John Wayne.

The airport has one main terminal, the Thomas F Riley Terminal, which houses both Terminal A and Terminal B. With two airline lounges, a fair amount of shopping opportunities and a range of food and drink options to suit all wallets, John Wayne Airport is a comfortable airport to use when traveling to California.

A number of airlines operate at John Wayne Airport. Some of the popular destinations served from the airport are Atlanta, Houston, Newark, Oakland and Honolulu. Terminal B’s concourse is currently under construction, but passengers using the airport will find that the airport offers convenience and a welcoming attitude.

How long are flights to John Wayne Airport?

John Wayne Airport is a smaller commercial airport located in South Orange County, California. It’s become the second busiest airport in the greater Los Angeles area, serving over 900,000 passengers every month. It serves as a regional airport, as well as an alternative to Los Angeles International (LAX), serving the immediate areas of Irvine, Costa Mesa, Anaheim and Newport Beach, as well as most of Orange County. Its proximity to Anaheim, home to Disneyland, makes it the premiere airport for anyone planning a trip to the Magic Kingdom; it’s also a popular choice for international flights to Mexico and Canada. Major airlines serving John Wayne Airport include Southwest, American, United, Delta, Frontier and Alaska Airways, as well as WestJet.

Flight lengths vary by departure city; the shortest flights, in general, are from California cities, including San Francisco, Oakland and San Jose; flights from within California rarely exceed 90 minutes.

Flights from the East Coast typically take the longest and require at least one connecting flight. Boston flights into John Wayne Airport take between 8h 40m to over 12 hours; New York flights take anywhere from six hours to over 10 hours. Flight lengths from Washington, D.C., take anywhere from just over seven hours to 8h 42m.

Where can you get direct flights to John Wayne Airport from?

How do you get from John Wayne Airport to cities in the surrounding areas?

Southern California is famous for its many freeways; travelers into John Wayne Airport will get acquainted with them quickly, as the best way to get around Orange County is by car. The airport is conveniently located near several major freeways, including the 405, the 5 and the 55, as well as close to the 110. These roads are essential for anyone who wishes to visit major destinations, including Disneyland, Los Angeles, South Orange County coastal cities like Newport Beach, Laguna Beach, Dana Point, San Clemente, and San Diego.

Travelers can find ample rental car kiosks between Terminals A and B; the airport features kiosks for Alamo, Avis, Budget, Dollar, Enterprise and National Car Rental. Taxis are plentiful outside the terminal; ride share apps are popular ways to get around the area. Public transportation, provided by the Orange County Transportation Authority (OCTA), is available outside the terminal as well as a special shuttle for Disneyland. The city of Irvine also features its own shuttle service, The iShuttle; these are available curbside in front of Terminal B, on the Arrival Level.

What are some things to do in South Orange County?

South Orange County is home to Disneyland, but it also features some of the most beautiful beaches in California, including Newport Beach, Laguna Beach, Dana Point and San Clemente. The beaches are famous for surfing, as well as sightseeing; Laguna Beach also hosts a world-famous arts festival every summer, from July through August every year. Laguna Beach also features one of Southern California’s most celebrated art museums, the Laguna Museum of Art, showcasing California contemporary artists.

Newport Beach is also famous for its fantastic shopping, home to Fashion Island Mall, featuring dozens of high-end shops. For even more spectacular shopping, Costa Mesa’s South Coast Plaza is one of California’s most iconic shopping malls, featuring some of the best-known fashion brands from all over the world. Irvine, home to John Wayne Airport, even has its own spectacular shopping center, the Irvine Spectrum Center, featuring over 100 stores and a cinema as well as a 108’ high ferris wheel.

Do I need a passport or visa to fly to the Glacier National Park International Airport?

How popular are flights to Santa Ana this year?

Santa Ana has seen a 74% decrease in demand for flights to the city compared to last year. 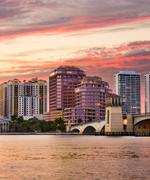